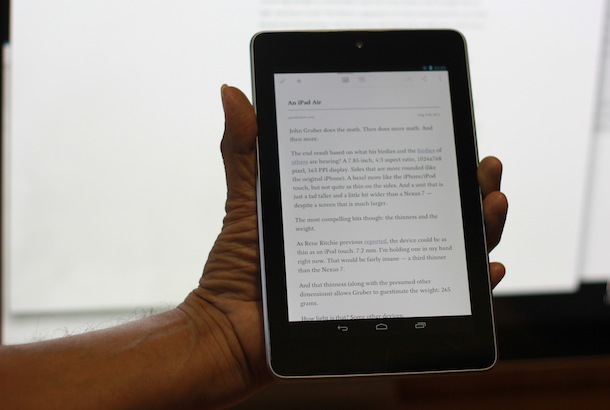 A week ago, I went ahead and bought myself a Nexus 7. I hadn’t planned on buying the device, nor was I actively trying to get my hands on one. I had read its reviews of the major technology sites after it was launched, but it remained on my “It’d be cool if I had it” list. The only attractive thing about it for me was its form factor. But when I received an IM from Mikhail saying that he knew someone who was getting a couple of devices to India, I figured I’d give it a try.

When the rumors about the “iPad mini” picked up steam recently, I wrote that it would only appeal to me if Apple made it handy & light enough that I can easily hold it in one hand. I already have an iPhone 4 and the new iPad. So the only reason why I’d want to own a device that sits between these two screen sizes is reading — a device with a screen big enough to comfortably read and a form factor small enough that it’s light and easy to hold. The Nexus 7 appeared to fit this criteria perfectly, so I went ahead with the purchase. The device isn’t officially sold in India yet, so this was a grey-market purchase at Rs. 14,999.

The Nexus 7 measures 198.5mm x 120mm x 10.45mm. It’s just 12cm wide, and hence is very easy to comfortably hold between your fingers and thumbs. It weighs just 340 grams, so it’s also light enough that you can hold at the sides, gripping by your palm and resting your thumb on the bezel on the side. This makes the Nexus 7 the perfect little reading device for me in terms of form factor. However, that means nothing if the screen isn’t good enough for reading text. Thankfully, the Nexus 7 has a 7″ screen with a 1280×800 back-lit IPS display. That’s a pixel density of 216ppi, almost as good as 264ppi on the Retina Display of the new iPad. This way, the Nexus 7 has a great screen for displaying both text and image/video content in a small package and makes for the perfect reading device for me. 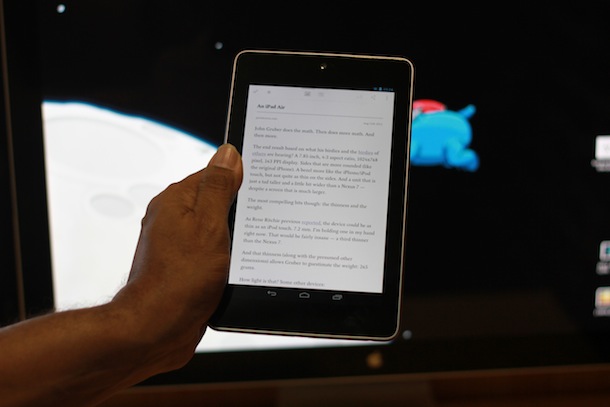 The very first app I installed on the device was Pocket and then, Google Reader. Pocket looks incredibly great on here and every night, just before I sleep, I spend a good 30 minutes lying down & reading through the articles I have added to Pocket. I have found myself reading a lot more on this device than on my iPhone or iPad, in spite of them having better reading apps. Moreover, my reading consumption has vastly increased in the last 7 days. I am going to install Amazon’s Kindle app and see if I can complete reading a book entirely on this device, considering I’m someone who generally hates reading books. In my 26 years of existence, I have read a total of 5 books only.

Rumors and reports that Apple’s readying a smaller iPad have gained momentum in recent weeks, with a possible introduction as early as an event on September 12th. However, a lot of these reports claim that this smaller iPad will continue to have a 4:3 screen ratio with a resolution of 1024×768. I don’t know what this means for the device measurements, but if it’s wide enough that I have trouble holding it on one hand, I see no reason why I’d want to buy it.