I took delivery of the new iPad on March 19th and have been enjoying every moment I play with it. I decided to go with a Vodafone 3G SIM instead of Airtel since Airtel has been less than average in their 3G coverage near my house and I wanted to try Vodafone India anyway.

Here’s a screenshot from the new iPad running Vodafone 3G in Mumbai, India. As you can see, I get really good speeds with Vodafone. I tested the speeds at different times of the day and at various locations, I never got any result below 7Mbps. 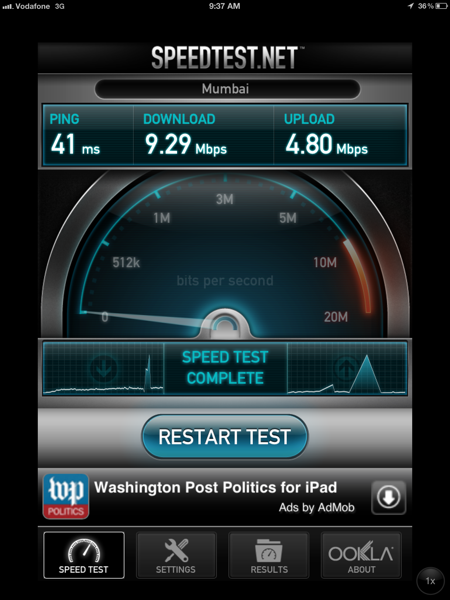 I did try to test Airtel 3, but I never got a 3G signal on it, I could only see the EDGE signal on it. If I do find 3G on Airtel, I’ll update this post.

Update: A few people emailed me asking if the Personal Hotpspot feature is supported by Vodafone India. I can confirm that it does. Just enter the Vodafone APN (www) in the ‘Cellular Data’ Settings and it’ll work.