Why the Android Keyboard Just Doesn’t Work for Me

About two months ago, I got myself a Galaxy Nexus. I’ve been an iOS user since early 2008 when I bought the first-generation iPhone from the grey-market in Mumbai for 22k. That was the most I had spent on a mobile phone, and it instantly went on to prove itself as a worthy purchase and the smartest decision I had taken in a while. The iOS ecosystem (known as iPhone OS back then) grew like crazy after the introduction of iPhone OS 2.0 and we all know where it stands today. Since then, I’ve moved from the first-gen iPhone to the iPhone 3GS and then from the iPhone 3GS to the iPhone 4 (and hopefully from the iPhone 4 to iPhone 5 very soon). You could say that I’m well settled into iOS by now and have gotten used to the freedom and limits it has to offer.

Yet, in working with apps for Beautiful Pixels over the last couple of years, I’ve grown more and more curious about the Android ecosystem. We get a lot of email asking us why we don’t review Android apps or just from an Android developer asking us to take a look at his app. So I decided to jump onboard the Android wagon and got myself a Galaxy Nexus and was using it as my primary phone for the last two months, up until last week when I moved back to my iPhone 4.

While the Android keyboard has seen a terrific improvement from what it was back in Android 2.2, it still falls short of the experience the iOS keyboard offers. My experience using the keyboard on the Galaxy Nexus was the biggest annoyance during the time it was my primary phone. For starters, it just doesn’t have the same touch feeling as on the iPhone. The latter feels much swift and responsive than the former, which required a slightly harder push on the touch. Now, I’m told this may be because the screen of the GNex isn’t as good as the one on the Samsung S3 or the HTC One X, but the Nexus is still the best phone out there that offers a stock Android experience.

Moreover, the actual typing experience on the Android keyboard is terrible. Suggestions are just not there yet. Take a look at the following example. I wanted to type ‘answered‘, but missed out on the character ‘s‘. The iOS keyboard correctly suggests if I’d like to change it to ‘answered’. The Android one, on the other hand, suggests ‘answer’ and ‘sneered’ — none of which are close to what I’ve typed. 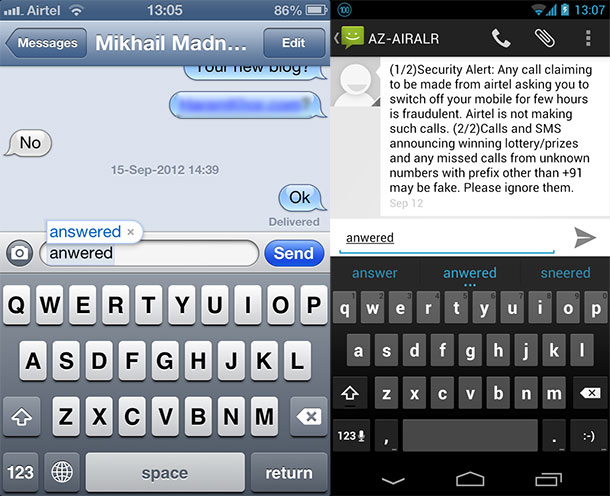 So I try to check what other options are available for suggestion and tap the word and am shown the following list. 10 cookie points to anyone who can point out the suggestion I’m looking for in this list. 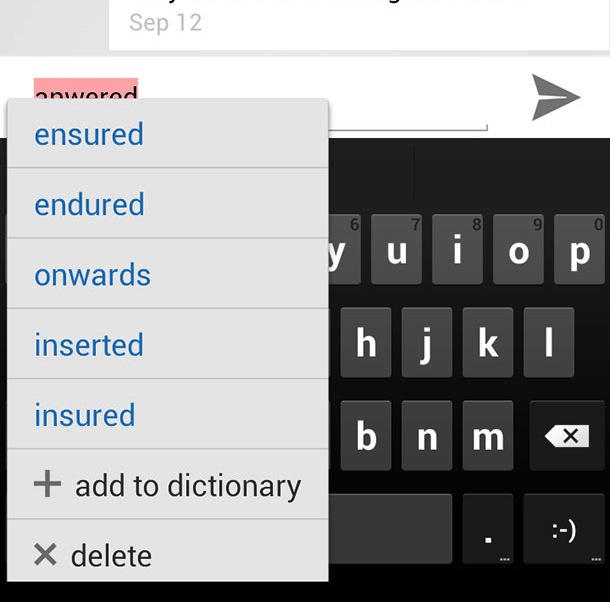 So what’s the next logical step? You try to manually move the cursor to the spot and add the missing characters. Unfortunately again, moving the cursor on Android isn’t as easy as it is on iOS. You can’t tap and drag to move the cursor, you either have to tap exactly where you want the cursor to be or tap once so a little blue handle appears and then drag & move the handle. So this takes 2-3 extra taps to get it right every time in my case.

I also particularly dislike the way the Android Keyboard requires 3 taps to add a word to the dictionary. When you tap once, it shows you an arrow with the option to “Tap again to add to dictionary”. Now ideally, this should be enough. But this then leads to a popup with the word you’re trying to add to the dictionary filled in, with the option to Save or Cancel. A totally unnecessary 3rd step in my opinion. There are other minor annoyances with the keyboard, but these are by far the worst of the lot. The suggestions are helpful very few times. Now, many have suggested that I should be using the SwiftKey 3 keyboard, and that I have. It just didn’t suit my style of typing and often tried to be a step or two ahead of what I was trying to do, resulting in unnecessary deletion and redoing what I had typed. I gave up after 3 days. It felt like I was trying to get used to SwiftKey 3 instead of getting it to adapt to my style of typing.