WordPress for iOS Gets a Fantastic Update

The WordPress app for iOS has just been updated to version 3.1 and brings in some much needed and some nifty features. While the previous version was feature-packed, it still felt stale and sub-part compared to most other apps. While I don’t use the app that often since most of my publishing either happens through MarsEdit or the browser itself, it was still a great tool to have when I was traveling or away from my Mac and needed to quickly publish something or make an edit. 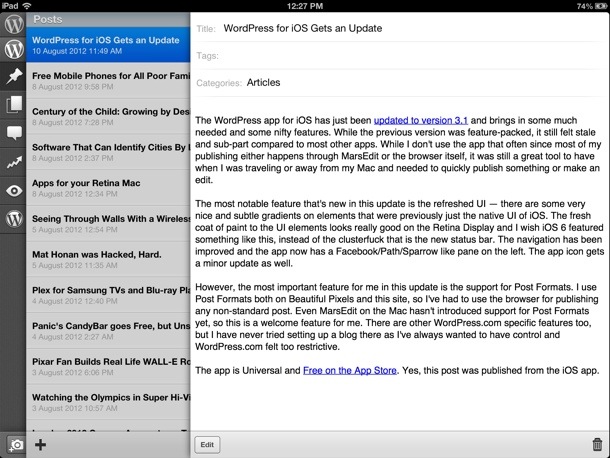 The most notable feature that’s new in this update is the refreshed UI — there are some very nice and subtle gradients on elements that were previously just the native UI of iOS. The fresh coat of paint to the UI elements looks really good on the Retina Display and I wish iOS 6 featured something like this, instead of the clusterfuck that is the new status bar. The navigation has been improved and the app now has a Facebook/Path/Sparrow like pane on the left on the iPhone version while the iPad version has a Tweetie app like paned interface. The app icon gets a minor update as well.

However, the most important feature for me in this update is the support for Post Formats. I use Post Formats both on Beautiful Pixels and this site, so I’ve had to use the browser for publishing any non-standard post. Even MarsEdit on the Mac hasn’t introduced support for Post Formats yet, so this is a welcome feature for me. There are other WordPress.com specific features too, but I have never tried setting up a blog there as I’ve always wanted to have control and WordPress.com felt too restrictive.

The app is Universal and Free on the App Store. Yes, this post was composed in and published from the iOS app.