Just Type is an amazing Notes app for iOS by Shubham Kedia, who is otherwise known for developing some stunning Winterboard themes in the iOS Jailbreak scene. The app’s UI is very close to Shubham’s style if you’ve known and used his themes in the past and there are some neatly crafted animations and transitions all through the app. I was very impressed by the app when it was released in June and have been using it on and off in my note-taking habits. The app is available Free on the App Store and readily syncs your notes via iCloud.

Today, the app has been updated to version 1.3 that introduces Dropbox integration for those wanting to see their files on a file system. The Dropbox integration also means that you can also access the notes you create in Just Type from other apps. The app also now has a handy “Open In…” option that lets you open your notes in other 3rd party apps installed on your iOS device. 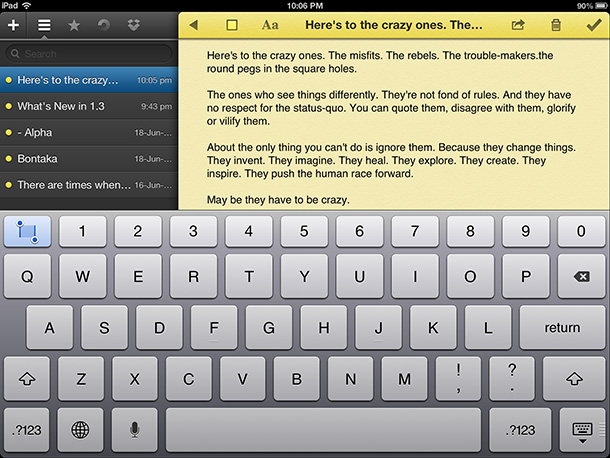 But the best feature from this update is the new keyboard layout on the iPad. Inspired by this concept video by Daniel Chase Hooper, the app now features an additional row of numbers at the top and supports two and three finger gestures to move your cursor around. There’s also a special button at the top that lets you select text when you’re moving the cursor. Another minor addition with this release is a better bulk action UI, wherein tapping and holding down the notes list lets you bulk edit, star, change color or delete your notes.

While the update itself is free for all existing users, the Dropbox integration is a paid feature that is enabled using In-App Purchase for $0.99. Just Type is still a solid app to have on your iOS device and comes Free from the App Store.