Back in January, I wrote about the Vu SuperMac TV by Vu Technologies. The company claims it to be the first “Apple based TV” in the world and rightly so — it’s a TV with an actual Mac mini inside it. When you power it on, the Mac boots into OS X and is available as one of the sources. You can use it as a standard Mac. Technically, it’s a giant screen attached to a Mac mini. However, Vu Technologies actually bundle and integrate the insides of the Mac mini into the back of the TV, so the TV is as slim as it can be. 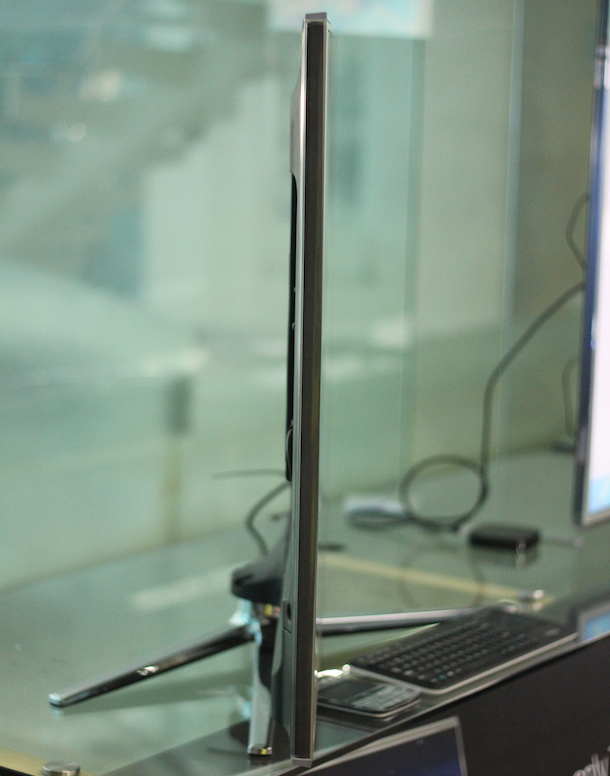 Side View of the TV

When I wrote the hands-on article linked above, I spent 45+ minutes playing with the TV at their experience zone in Andheri. Even though I had gotten a good idea of what the product offering was, I wanted to actually test out the rest of the product hardware and the company was kind enough to send me a unit for review for a few days.

I was sent a 55” Vu SuperMac 3D TV and for some reason, it looked far more huge than at the experience zone. The box comes with two 3D glasses, three remotes and a table stand. The installation was quick and took around ~15 minutes including a quick demo.

The Panel & the Frame

The TV’s panel is what I was most interested in checking out. Brands like Sony, Samsung, LG, etc. are currently leading the market when it comes to picture quality, so I was interested in seeing how good this panel was. Quite good, it turns out.

The panel on the Vu SuperMac TV did a substantially good job of producing rich colors, sharp pictures and overall pleasing picture quality. I currently have a 40” Samsung Smart TV at home and the results were just as good on this. Unlike my Samsung though, the Vu TV had a matte panel which made things even better. I have a fairly large window in my drawing room that casts an ugly glare from my point of view. The matte panel did an amazing job in this case, with almost no glare through the window.

The frame on the TV is metallic silver with a transparent border around it, kinda like the Nokia Asha 503 phone. This looks good, until you start watching a movie, after which it gets distracting. I’d have preferred a slim, black border over this any day. The transparent glass-like border around the silver frame feels totally unnecessary.

This was also a ‘3D’ TV and ships with two Active 3D glasses (need batteries). These are the kind that flicker and darken your view when you turn them on. However, the actual 3D experience was quite fascinating and good. The TV allows you to not only view 3D content (say, via a PlayStation or Xbox console), but also lets you play 3D video files on the Mac and view them in 3D. Literally every elder in my family was fascinated by the 3D and took turns watching the demo content, over and over again. There’s a 2D-to-3D conversion mode as well, but that’s not worth talking about.

The TV’s ports are comfortably placed to the lower left side of the unit. There are 4 HDMI ports along with the other usual ports. However, one of the HDMI ports is used up as the input from the Mac mini, which I found disappointing. Not only is that one less port to use externally, the connection from the Mac mini is actually using an HTML cable that sticks out of the unit and goes into the port. The company could’ve quite easily just built this connection internally and only sported 3 HDMI ports. Moreover, the ports themselves are oddly placed. Two are at the sides while two are at the bottom. Most other TVs I’ve seen, including my Samsung, places all four ports in a line, numbered similar to the on-screen menu.

There’s a red power button right next to the base-stand at the bottom to turn the Mac on/off, in case you have manually shut it down.

Another disappointing feature of the TV is the TV software. In my 2+ weeks of testing, this was what annoyed me the most. The menu interactiveness feels old, slow, laggy and the design is plain boring. The icons used are really bad too. When the TV goes on standby (no picture input), it display a intense bright blue color on screen. It’s like you’re back in the 90’s, and the CRT display has thrown a BSOD at your face. This is especially bad when you’re watching TV at night and turn the input source off first. Imagine a really bright, 55” screen displaying nothing but blue on the screen. Yeah!

As I stated in my hands-on article, the Vu SuperMac TV ships with three remotes that all work simultaneously. You can pick the one that best suits you, according to what you’re doing then. There’s a typical “TV” remote, a mobile, Blackberry or Nokia E71-like remote and a full-QWERTY keyboard + trackpad by Logitech.

The Logitech keyboard is for when you want to sit down and type on the Mac or type long sentences comfortably. The mobile Blackberry-like keyboard is, I assume, to make minor instances of typing easy, such as searches on YouTube. It’s small enough to pick up and type using one hand and also move the mouse pointed around. Both of these are quite handy and definitely a nice thing to have around.

The TV remote is for all the functions of the TV itself — changing sources, volume, settings, power ON/OFF, etc. And for a TV that costs so much, the remote is disappointing. It feels too plasticky, squeaky and is of a very poor build quality. The buttons feel weird and wobbly. This, combined with the slow and laggy software ends up being very annoying.

Even with the disappointing software and TV remote, overall the Vu SuperMac TV feels like quite a solid product that can stand its ground. This isn’t a consumer product as such, Vu Technologies rather targets corporate and SME offices as it makes for a great conference-room or reception-area displays.

The Vu SuperMac TV comes in different sizes and is priced as follows:

Just like the hands-on article, I’ll end with this:

A quick check online reveals that a standard 50″ Vu TV retails at INR 61,990 while a 55″ Vu TV retails at INR 110,000. Add a Mac mini to this, which retails at INR 52,900 and you have the same combination for far cheaper than what the SuperMac TV is priced at. Of course, you’d still have two different boxes to deal with, but is it really worth the price difference of 20k+?